Most of the time, as a grown woman, I would feel silly about voting more than once for players in the All-Star game. I mean, we know it’s all a ruse, right? Stats mean nothing and many of the fans voting just want to see who they perceive as “stars,” which would explain why Ken Griffey Jr. has more votes right now than Nick Markakis.

I also suspect that many fangirls have been busy voting, which is the only thing that makes sense when you consider that Jarrod Saltalamacchia and his .245 BA are in second place behind Joe Mauer, while Victor Martinez (BA .344) is in fifth. I mean, I love me some Salty; he’s a solid starter on the AL hottie team: 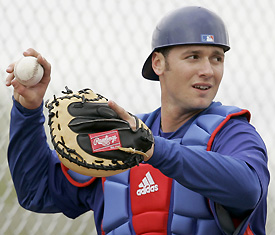 And apparently he’s quite the natty dresser, but I don’t see him as an All-Star this year. But I digress.

One of the few things that could make me vote multiple times is the nausea-inducing idea of Kevin “Melon Head” Youkilis beating out Tex. So please, go vote for Tex. Or vote for Justin Morneau. I would be okay with that. Because if Kevin Youkilis wins, we all lose.

The other night, after a coma-inducing rain delay, Joba Chamberlain was only able to go four innings. I believe he left with the game tied 3-3.  Perfect spot for Chien-Ming Wang to come in and get some work, no?  No. Instead we got Aceves, who has been good but had pitched a wholly unnecessary inning in the previous game. Things did not end well.

Pete Abraham covered this the other day, questioning why the Yankees would leave a pitcher they once considered an “ace” twisting in the wind.  So, last night, when they brought Wang into an 8-2 game, I threw my hands (and the remote) into the air as if to say, WTF?

He did well, considering he was handed a mop. No runs, no hits, two strikeouts, and he threw 18 of his 26 pitches for strikes. Does anyone else feel that he would not be in bullpen limbo if he was more of a squeaky wheel, so to speak?

Forget the Joba debate being ridiculous, this is idiotic. If he’s shown in rehab, minor league stints, and bullpen sessions that he’s much stronger now, why not put him back in the rotation. I don’t think that Phil Hughes deserves to go back to Scranton, but I certainly think that Wang, with his seniority and his overall success, should be given preference. I love Phil, I really do. But I want to know why it’s okay for Wang to sit in the pen and it’s not okay for Phil. Someone, please explain.

Last night, I was taken away from The Boys when it was 4-4 in the fifth or so. What could possibly tear me away?

While I was watching that (and an incredibly irritating episode of Survivor), the Yankees apparently were tearing it up.  I can’t lie – I liked the fact that the Bobby Abreu Defensive Follies worked in our favor this time.  I also enjoy Melky doing well, but I feel for Brett Gardner. I’m always a fan of the “gritty, gutty” players, as Pete Abraham likes to call him. I hope there will be a place for him at some point. I mean, Johnny Damon’s arm couldn’t throw out my grandmother.  She’s pretty spry for an 80-year-old.

In other news, Nick Swisher doesn’t even really need to try anymore in terms of winning me over. It’s in the bag. But he just keeps showering down the awesomeness anyway. Take this little bit from Kevin Devaney of LoHud who blogged the game last night in place of Pete A.:

“Swisher’s collage was completed by tonight’s return to the stadium. He
cut out pictures of every teammate and taped them all together on the
right side of his locker. Most of the players are in snazzy suits.“

In addition to being The Man, he’s also an aspiring artist. I’m so hooked.