Can I just say that A.J. getting suspended for a pitch that never made contact with Nelson Cruz is ridiculous?  In fact, the whole idea of suspending pitchers for what you suspect their intent was is ridiculous. How ’bout we just suspend and fine the guys who actually throw at and hit someone? That would be a novel idea.

Let’s take Sherriff Joshua Patrick Beckett, for instance. I believe he was pitching a no-hitter the other night when a batter tried to bunt for a hit. Apparently, that breaks the Man Code or something. Never mind that, as the opposing team in that situation, you really need baserunners any way you can get them. Josh wasn’t about to let that go unpunished. He promptly hit the guy the next time he came up. Did he get suspended or fined? I haven’t seen anything about it.

I love that Teixiera got hit twice in the Yanks-Rangers game in question and three other Yankees got buzzed by Padilla, but the headlines are all about A.J.  The Rangers get to quietly put Padilla on waivers for being such a ***** and endangering his own teammates? Seriously, let’s get rid of all this disingenous crap about throwing at people. If Pedro Martinez had been fined enough for every head he ever threw at, he’d be back under his mango tree without two pennies to rub together.

I like to watch pitchers. I like the whole idea of a one-on-one battle with the hitter and how exciting it can be when someone is just mowing down batter after batter.  I like seeing big numbers on the radar gun, but what I really like the best is any pitch with crazy movement.

You have to have a big ego, or at least a lot of inner confidence to be out there on the mound in front of all those people with the game essentially in your hands.

And so, with the mention of big egos, we come to the nasty little secret that colors my recent years of baseball fandom. The secret that’s not so secret to anyone who knows me. The secret that would make Yankee “purists” excommunicate me. 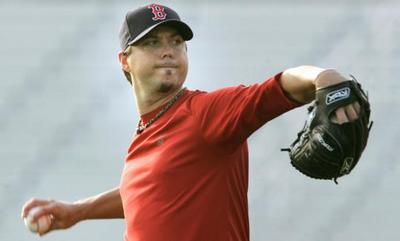 I get that he’s not the most cuddly guy around. I get that he can be a complete jack***. I get that he pitches for the Red Sox and, before that, pitched for the team that denied the Yanks a World Series title in 2003. But I’ll tell you this: in 2003 I wished we had someone like him on our team. He was cocky, focused, and never seemed to doubt himself.

Fast forward to 2006 when he became a Red Sox, forcing me to cheer for him personally while still wishing for his team to lose.  He got knocked around quite a bit, mostly due to his incredible reservoir of stubbornness. But I still felt that his intimidation factor was high because, more than anything else, he believed himself to be a badass.

Then, in 2007, I got hooked on Joba Mania. In Joba I found all that I had been looking for in a Yankee over the course of the last decade. You see, the workmanlike manner of Jeter and Mo and Posada is great, but I want to see some fire. I want someone who will challenge hitters; someone who isn’t afraid to mix it up. And definitely someone who shows emotion out there. 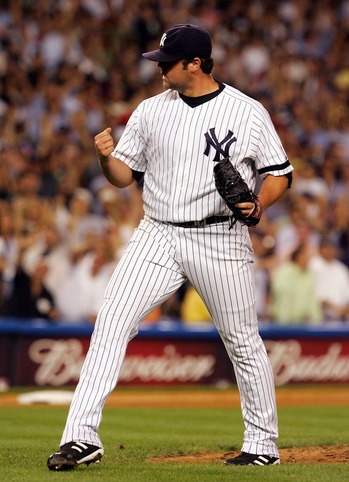 Joba was all that and then some. And I think he still is despite various bumps in the road. What’s great about him is that he can stalk around the mound and stare down a hitter without giving the feeling that he’s a raging egomaniac 24/7. It’s the difference between confidence and arrogance.

Tonight Beckett and Joba pitch against each other again. I don’t know if I can take it. Joba throws hard and tries to establish himself on the inside part of the plate. Beckett also throws hard and tends to act like he is The Enforcer, put on this earth to unleash f-bombs on anyone he feels is not playing the game “the right way” (see: Abreu, Bobby).

It all just adds some extra tension to a game that already puts people in a mood where they are ready to snap like dry twigs.