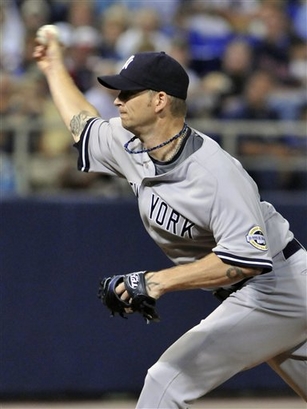 There’s no way around it: A.J. Burnett is a badass. (He also gets extra points for not being as mean and nasty about his badassery as his buddy Josh Beckett. But I digress.)  Last night he didn’t really have control of anything but his fastball, but you gotta respect the way he battled. I was surprised to be thinking in the seventh inning that they should have kept him in there a little longer.

Yes, three wild pitches and four walks are not ideal. But when he needed an out, he buckled down and got an out. That’s the kind of resilience I want to see. Joba should stop arguing with Jorge and start asking A.J. what he does to calm down in those situations.

Speaking of needing to calm down, and people thinking you need to calm down, we have Phil Coke and Nick Swisher.  Always eager to add to the adventurous nature of a game, Phil Coke seemed to have a bit of a hyper moment out there, giving up a home run to Joe Mauer.  I often want to tell him to count to ten, do some yoga, picture Joe Mauer in his underwear. (Whatever works.)

Swisher on the other hand loves being out in the field so much that he needs to dispel some of that pent-up energy with little hops, skips, and jumps up against the padded walls. He must have been an exhausting little kid.  I kind of understand why Girardi talked to him in the dugout about it, but I tend to think that Girardi is Debbie Downer. C’mon man, Swisher is high on life and you’re just killing his buzz. 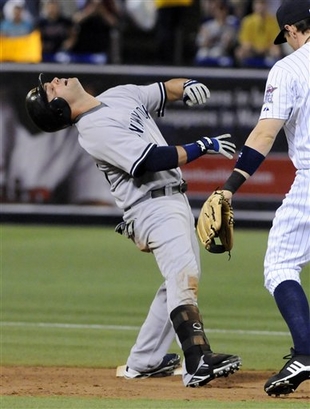 All in all, the game moved a little slowly for my taste. My boy Brett Gardner was actually the only one trying to inject any speed into the proceedings. My fondness for Brett continues to grow with each passing day. I don’t care what people think the racial implications of calling a white ballplayer “scrappy” or “gritty” are.  That’s not how I see it. White, black, Latino, Native American: if you exceed expectations, prove you can help the team, and don’t take your spot there for granted, you’re good in my book. I want you on my team and I will call you scrappy, gritty, gutty and, occasionally, awesome. Keep it rolling, Brett the Jet.

Finally, I just want to say how endearing Francisco Cervelli’s comments were about his time in the big leagues.  Now that he has returned to AAA-Scranton, and even though I have a soft spot for Jose Molina, I think more people than just CC and AJ are going to miss him.

Okay. I know. I was the pessimistic one yesterday. And I think the frustration had reached a boiling point for many in the Yankee Orbit. Then, we were treated to this:

The drama! The intensity! The incredibly terrible call by this here ump! I believe that a manager getting thrown out can fire up his/her team. But in this case, I think it was actually the bad call on Gardner getting “picked off” first. It wasn’t even close. Something that maddening is bound to push a frustrated group right over the edge whether the manager gets thrown out or not. And it did. In a good way.

Francisco Cervelli, who does have a way of making good things happen (although I am emphatically not in the group calling for Posada to be put out to pasture), hit his first major league home run, and nobody in the dugout even bothered with the pretense of giving him the silent treatment.

(Speaking of Cervelli, I can’t get a handle on his accent. I know he is from Venezuela and that he played in the WBC for Italy. Is he of Italian descent? His accent kind of had that feel to it in the postgame interview with Kim Jones.)

The home run opened the flood gates for a string of hits and runs to preserve a win for Joba, who pitched very well. But the best moment was yet to come:

Mo’s got a bat! Look out. He actually hit the ball pretty hard to center field, although it was caught by Nate McLouth. Of course, CC Sabathia’s reaction was priceless. As soon as the ball came off the bat he started jumping up and down like a mad man. It was kind of an awesome moment. That’s the kind of enjoyment I look forward to seeing from my boys. I hope we get to see lots more of it in the near future.

Here’s Mark Teixiera being talked down from the ledge by Joe Girardi after being hit for the second time by Texas pitcher Vicente Padilla. Bad move, Vicente.

On the very next play, Tex slid hard into Elvis Andrus at second to break up the double play. That’s what he’s supposed to do, but he seemed extra intent on flipping Andrus like a pancake. Fine by me. I mean, I’m not big on displays of anger or frustration, but he simultaneously kept the inning going and blew off some steam.

If I’m remembering correctly, this Padilla guy is the same guy Swisher charged and tackled when the Texas pitchers hit him two or three times in a row two years ago, when Swish was with Oakland.  So, no surprise that Padilla’s still throwing at people. I guess, if anything, it’s weird that tonight he was throwing at a former teammate.

Whatever. His coming unglued got the Yanks fired up to the tune of seven runs. Anyone else want to make Mark Teixiera angry? Be my guest.

This term has always been a favorite, since my brother first used it to describe having no job, no girlfriend, and no car circa 1995.  I know my tagline says to take deep breaths and to check in with reality every once in a while, but the reality is bleak.

Which is not to say that the future is bleak. Just the present. But that’s what bothers me. Because, if you get beat up enough in the present, your psyche may not rebound in the future.

My Red Sox-lovin’ husband said to me last night, “Do you really think this team is an under-.500 team?” No, I do not.  His point is that they will click at some point. My point is that if the frustration reaches maximum levels, the pessimism will infect even the most optimistic guys. 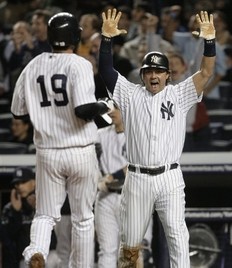 I really like this group of guys. I want to see them do well. But I’m beginning to suspect that they will have to mutiny in some way to get it done.  That’s right: I’m breaking down and blaming Girardi.  No, he’s not responsible for the horrible team batting average with runners in scoring position, but after two weeks of watching games and saying “Why? For the love of god, why?” to many of his decisions regarding starters and the bullpen, I can only come to the conclusion that, at some point, he’s going to stir up more frustration than inspiration in the dugout.

For now, the reality is that smiles and high-fives are few and far between, and Mo’s face right here tells you all you need to know:

Because of various forces (rain, Celtics, Extra Innings blacking out Saturday’s game) I took some time away from my beloved boys in pinstripes.  Seems like CC Sabathia had the same idea.

But seriously folks, I was distressed by the injuries piling up, including the beaning Swisher took off his elbow. (Watch your back, Jered Weaver.)

I have also been distressed about the impending A-Rod book and what it’s release will mean.  And by that I don’t mean how it will affect him or the team, but the way in which the book’s release will be covered by a bunch of (almost completely) male sportswriters and baseball people.

It started right on time, Friday, when Michael Wilbon decided to call Selena Roberts’ choice to write the book “low-rent.”  I’m sorry – when the guys at the SF Chronicle were digging into Barry Bonds’ life with his mistress and taxes and whatnot, I don’t think I heard the term “low-rent.”  I must have missed it, but I also didn’t hear anyone say anything about Tom Verducci’s motives when he helped Torre focus on the negative in his recent book.

And Joe Girardi, although he has to protect his players, was positively bambiesque yesterday when he talked about players’ kids having to hear or read about their parent’s mistakes because some writer thought it was a good story. Especially with someone sitting on his bench who happens to have daughters but still thought it was a good idea to talk about cheating on their mother in a book he wrote.

Women’s motives are always questioned in sports. And even worse than that is the idea that, in the sports world, men can use gender alone to discredit someone when they don’t like what they’re saying or writing.  I know that men would like nothing better than to have all women kicked out of the Sports Treehouse. After all, this is supposed to be some sort of male sanctuary or something.

Here, then, is the solution for A-Rod. Sue the publishing company for libel. If Big Bad Selena Roberts is being mean to poor, fragile little Alex, then he should seek some legal recourse. Of course, that won’t happen because everyone knows that the best defense against libel is for the statements to be true.  And I’m willing to bet they are.