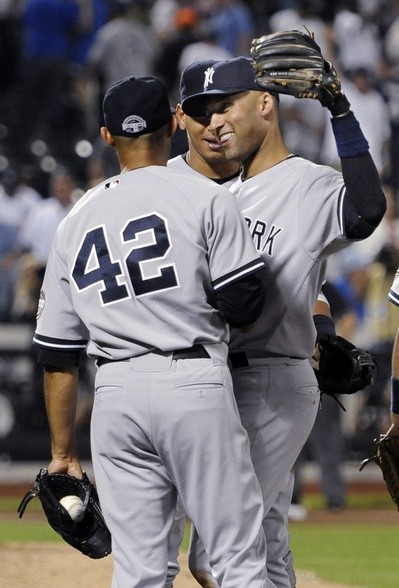 Last night, it was sweet to watch Mariano Rivera record his 500th save (and his first-ever RBI).  Today, people have written all about Rivera’s legacy and what the numbers mean and all that other stuff.

For me, as a fan, it comes down to one thing: He has been as close as there ever was to a sure thing.

There are so many facets to a MLB win: hitting, starting pitching, relief pitching, defense, base running, fan interference…

But being the closer always seemed to be the position in which you have to have immense courage and a zen-like nature to excel. There’s not much worse that losing a game on one pitch that came out of your hand.

Mo almost never seemed phased by the responsibility of being that guy. Even after blowing a save to the Arizona Diamondbacks in Game 7 of the 2001 World Series, he seemed able to put it in its proper perspective. He was disappointed, obviously, but many lesser closers and lesser men would have let something like that destroy them.

Over the past few years, Mo may not have looked as sharp as he did in the prime of his career, but I still thought he could make things better. Young guys out in the pen? Let Mo teach them all his secrets. Wang having a crisis of confidence? Mo should have a talk with him. Set-up men nervous about facing certain hitters? Have Mo tell them his philosophy: Even in batting practice, when the guys know what’s coming, they don’t hit it well all the time. So, just throw your very best stuff in there and don’t be afraid of the contact.

I know people are wringing their hands over what happens when Mo retires, and I worry about that too. But if anyone in the ownership still has half a brain left, they’ll have him hired as a coach immediately after his farewell tour as a player. He’s still got a lot more he can share with this team.